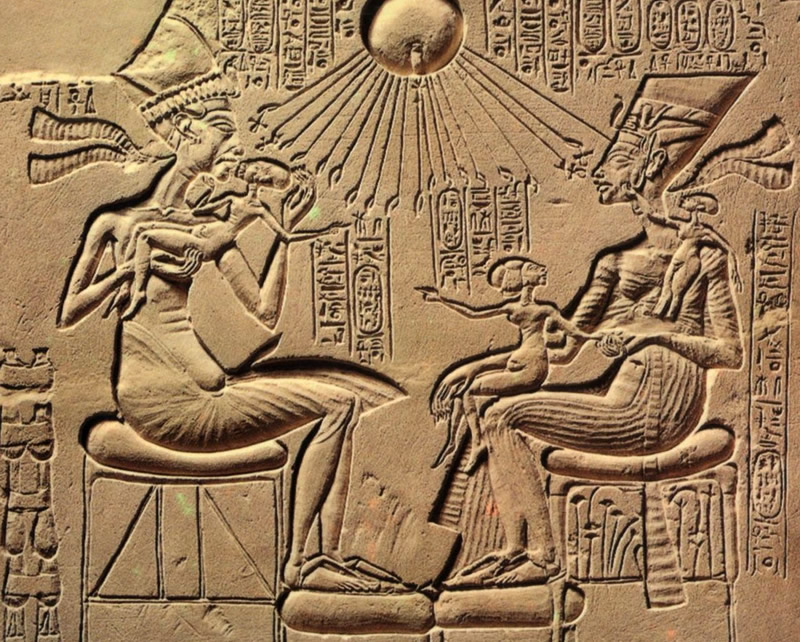 Addressing figure of pharaoh Amenhotep IV -Akenatón-, you start learning a look that breaks the orthodoxy of the official history of the West. Maybe that’s why, after two millennia her figure is beginning to be known and discussed as to understand the transcendence of this pharaoh in history is necessary to get rid of all dogmas.
When Pharaoh Akhenaten was the empire of Egypt had already existed for two millennia, comparable dimension of time which elapsed between the birth of Christ and our time.
The irresistible attraction of Akhenaten among Egyptologists forecast over the coming years may replace Tutankhamun in terms of mythical and mystical imperatives.
Just over a century no one knew of Akhenaten. The appearance of the statues was puzzled archaeologists, but the confusion increased to discover that strange character was the protagonist of a story that, until the late nineteenth century, no one had imagined.
Indeed, Akhenaten had the audacity to star in an unusual religious reform in Egypt, disrupting traditional worship their gods, which was described as a heretic, possibly murdered and his neatly hidden in what seemed an eternal oblivion doctrine.
The displacement of Olympus hundreds of Egyptian gods by one God was intolerable for “establishment” of his time.
The monotheistic worship of one god called Aton insubstantial, tore all the mythological construct that served the Egyptians to explain before, present and future.
The God Aton represented solar energy, the fullness of what gives life and gives movement to the Universe, an idea very little affordable for ordinary, even for the priests.
So therefore can be considered to Akhenaten as the first monotheistic history, and not only that, but its temporary location coincident with the Jewish Exodus from Egypt as inevitably linked with Moses and the emergence of Judaism.
Therefore, following this line of thought, Akenaton would be also in the very roots of Christianity, the spiritual foundation of Western Civilization, nothing less.
This particularity excited to historians and scholars, among them Sigmund Freud himself.
So it is important to begin the study of Akhenaten, his thought and religious conception, since when the Judeo-Christian culture qualifies as idolatrous Egyptians under the terms of the Bible, the pharaoh comes to put in basic line and even founding the monotheistic thought.
Finally, the other towering point Akhenaten is the God Aton, an entity without name and form, no less related to “Yahweh” Jewish; a cult of the sun’s radiant energy as the only deity that abolished the polytheistic idolatry.
An impossible to represent in monuments deity: solar energy, making it a forerunner of many scientific findings that two thousand years later allowed to know the benefits of solar radiation on all life.

‘In the footsteps of Moses’ by Patricio Colombo Murúa

’30 years within the dead’ by Carl Wickland