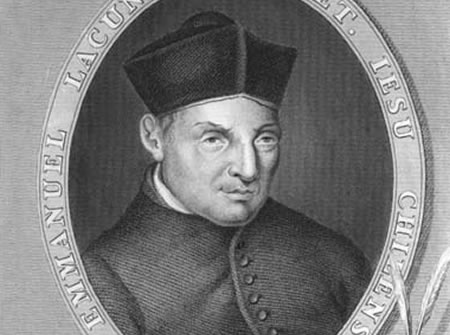 Born in Chile, Manuel Díaz Lacunza (1731-1801) is a well-known figure of the American religious movement that has generated over time the most debates, admiration or rejection by critics. His immortality is due to his book “The Second Coming of the Messiah in Glory and Majesty”, that sparked a heated debate among theologians, scholars or simple devotees. Lacunza’s work is part of the movement called “millenarianism”, which promoted the idea that Jesus Christ would come and reign on Earth in two successive stages: the millennial period and for eternity. Since this is a philosophy that is rejected by the Catholic Church, the book ended up being registered in the Roman Index. His literature can also be classified as “Colonial Literature”, due to its typically American traits; such as his speech against censorship, dialogue, his writing during exile and with the creating of utopias.Using the pseudonym of Ben Ezra, the Jesuit Lacunza analyzes the Apocalypse of St. John and the books of the prophets in the Old Testament, which lead him to conclude that the second coming of the Messiah is registered in the sacred text. Proclaimed by warning signs—famines, earthquakes, and disasters of all kinds—the Messiah will return to earth in “Glory and Majesty” to establish an earthly kingdom of a thousand years (real or symbolic) with the righteous, whom have been chosen in the first “judgment of the living.” At the End of the Millennium, the Antichrist will take control over men. The human race will be exterminated in a final conflict; the final judgment will come and with it, the end of time.

‘Many Lives, Many Masters’ by Bryan Weiss

‘The Apocalypse’ by Joaquino Da Fiore