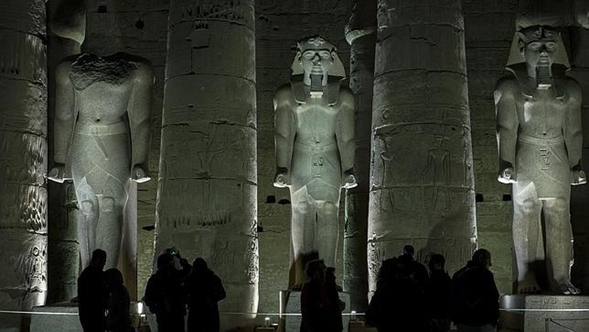 The recent discovery of a mausoleum belonging to the “Gatekeeper of the God Amun ‘, dating from the eighteenth pharaonic dynasty (1554-1304 BC), shows how violent were the days when Amenhotep IV, also known as Akhenaten replaced the ancient gods for the monotheistic cult of Aton God.
The tomb found near Al Qurnah in Luxor, about 600 kilometers south of Cairo, belonged to a person identified as Amenhoteb and is shaped like the letter T and is composed of the first room of 5.10 and 1.50 meters in length and width, respectively. This room leads eastward to another room that has a small unfinished niche and an entrance to a side chamber of two square meters, which has at its center a well.
The internal walls of the crypt are decorated with polychrome reliefs depicting the deceased and his wife in front of an offering table.
Precisely, the walls of the tomb testify that the passage from polytheism to monotheism of Akhenaten was not peaceful, as evidence of willful damage were found; some of its scenes and hieroglyphic inscriptions were scraped, including the names and titles of the god Amun and the deceased during the religious revolution that occurred during the period of Pharaoh Akhenaten.

‘Akhenaten and the first Jewish connection’